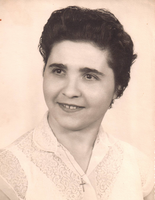 CANASTOTA . . . Angela Milana, 88, formerly of 114 Lewis Street, Canastota, passed away on Friday, September 13, 2019, at Colonial Park Nursing Home, Rome, NY following a lengthy illness. She was born on December 28, 1930, in San Pier Niceto, Sicily, the daughter of the late Francesco and Rosaria (Certo) Farina. Angela spent her early years in Sicily, attending school there, and learning how to be a seamstress. She later lived in France for 14 years where she met her future husband Giovanni Milana. They were married August 3, 1968, in San Pier Niceto, Sicily, and after the birth of their son, Francesco, she and her husband moved to Catania, Sicily. They operated a small grocery store in Catania before moving to Canastota, NY in 1978. In America she worked as a seamstress for many years, later working for RNH Corporation in Canastota. She loved to sew and welcome people into her home. Angela would escape into her garden with her dog Emmitt by her side, where she enjoyed cultivating her vegetables, fruit trees and especially her flowers. She was at her happiest when she was spending time taking care of her grandchildren. She faithfully attended St. Agatha's Church in Canastota for many years. Surviving are one son and daughter-in-law, Francesco "Frank" and Kara Milana of Oneida; five grandchildren, Elizabeth, Kelsey, Jack, Gio, and Angelia Milana; three sisters, Rosaria Farina, Carmela Sano, and Anna Farina; one brother, Salvatore Farina, all of San Pier Niceto, Sicily; as well as several nieces, nephews, and cousins, including, Tina D'Amico, Salvatore "Sam" D'Amico, and Ann Marie Popple. Angela was predeceased by her husband Giovanni Milana who passed away on February 14, 2013. She was also predeceased by a sister-in-law, Tana D'Amico; and a brother-in-law, Santo Sano. Angela's family would like to thank the staff at Colonial Park Rehabilitation & Nursing Center for the care she received. Calling hours will be held from 9 to 10 a.m. on Friday, September 20, 2019, at St. Agatha's Church, 329 N. Peterboro Street, Canastota. A funeral mass will follow at 10 a.m., with The Rev. Stephen P. Wirkes, Pastor, officiating. Burial will be in St. Agatha's Cemetery, Canastota. The family will greet friends in the Church Parish Center at a luncheon following the mass. Arrangements are under the supervision of the J. Homer Ball Funeral Home, Inc., 201 James Street, Canastota. In her memory, contributions may be made to St. Agatha's Church, 329 N. Peterboro Street, Canastota, NY 13032, with envelopes available at the church.