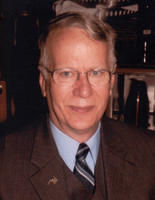 BLOSSVALE . . . Ronald F. Wetzler, U.S. Navy Retired, 68, of 3034 Haskins Road, Blossvale, lost his long battle with cancer on Sunday, September 22, 2019. He was born on July 23, 1951, in Loveland, CO, the son of the late Marion and Betty (Brunemier) Wetzler. After graduating from Loveland High School in 1969, he joined the US Navy. He was stationed in San Diego, CA, Norfolk, VA, Cape Hatteras, NC, Sicily, and New Orleans, LA, U.S.S. Yellowstone Portsmouth Naval Shipyard, VA, Norfolk, VA, retiring in January 1991, when he moved to Canastota, working as a Dental Technician. He was a proud member of the American Legion Post #1143 in Sylvan Beach. Ron enjoyed fishing, hunting, gardening, and his dogs. Surviving are: his dear companion of 16 years, Johanna C. Foley of Blossvale; her daughter, Amanda Kirkwood of Cicero; his son and daughter-in-law, Jayson and Daisy Meyers of Moreno, CA; two brothers, David Wetzler of Cheyenne, WY, and Donald Wetzler of Greeley, CO; his sister and brother-in-law, Julie and James Berheart of Denver, CO; his aunt, Kay Brunemier of Loveland, CO; and his grandchildren, Jared Wetzler of Southbury, NC, and Jylyn M. Meyers and Maximus Ronald Meyers, both of Moreno, CA; as well as several cousins. Ron was predeceased by two sons, Jared Wetzler, who died in 1999, and Joshua Wetzler, who died in 2014; and one brother, Larry Wetzler. Private graveside services with Military Honors will be held at Whitelaw Cemetery, at the convenience of the family. At Ron's request, there will be no calling hours. Arrangements are under the supervision of the J. Homer Ball Funeral Home, Inc., 201 James Street, Canastota.