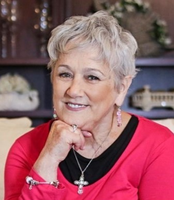 CANASTOTA . . . Mary Anne (Pavone) Dale, 71, of 1613 Traditions Court, Waxhaw, NC, and formerly of Canastota, passed into the arms of her Heavenly Father early Sunday morning, November 10, 2019, surrounded by her loving family, following years of battling breast cancer. She was born on May 3, 1948, in Canastota, daughter of the late Eugene, Sr. and Anna (Bartholomew) Pavone. Mary Anne was born and raised in Canastota, and was oldest of seven children. She graduated from Canastota High School in 1966, and would later marry her high school sweetheart, Ted Dale. After relocating to Charlotte, and while raising her children, she attended Central Piedmont Community College in Charlotte, and obtained her Associates Degree with honors. After graduation she went to work with the Mecklenburg County Dept. of Social Services as a Case Worker and Fraud Investigator, where she completed 21 years of service. All of her life Mary Anne was heavily involved in Church activities and organizations. Her faith brought a lot of people to know Christ. While her family was the main stay of her life, she loved crafts and being the social butterfly that she was, she was known as a gatherer of people, the life of a party, and as someone who could light up a room. Everyone she met was her friend. Mary Anne married Theodore "Ted" Dale on May 25, 1968 in St. Agatha's Church, Canastota. Survivors besides her husband of 51 years are: three daughters and sons-in-law, Kelly and Mitchell Cashion of Newnan, GA, Kerry and Joel Long of Waxhaw, NC, and Katy and Jason Smith of Weddington, NC; her grandchildren "her 8 Blessings", Elizabeth Cashion, Caleb Cashion, KaiLi Long, Ava Grace Smith, Ethan Cashion, Elijah Long, Joshua Long, Noah Smith; her brothers and sisters, Eugene and Roberta Pavone, Jr. of Calabash, NC, Kathy Devine of Charlotte, NC, Christine and David Bargabos of Indian Trail, NC, Michael and Jane Pavone of Canastota, Betsy and Steve Kinslow of Matthews, NC, and Nancy and Mike Shelly of Clermont, FL; as well as several nieces, nephews, and cousins. Memorial services will be held at 4 p.m. on Saturday, December 7, 2019, at the J. Homer Ball Funeral Home, Inc., 201 James Street, Canastota. The Rev. Anthony F. Tosti will officiate. Her family will receive friends prior to the service, from 2 to 4 p.m. on Saturday, at the funeral home. In her memory, contributions may be sent to an organization that Mary Anne was passionate about, Cindy's Hope Chest, P.O. Box 1215, Indian Trail NC 28079, with envelopes available at the funeral home, or visit www.cindyshopechest.org