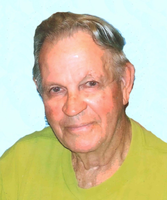 PULASKI . . . Edwin C. "Ed" Burlarley, Sr., 89, of Pulaski, passed away on Tuesday, December 10, 2019, at St. Luke Health Services, Oswego, following a brief illness. He was born February 22, 1930, in Margaretville, the son of Violet Schultis. Ed spent his early years in Kingston, later living in Canastota for 30 years. More recently he spent winters in Ocala, FL, and summers in Chittenango; and has lived in Pulaski since May of 2012. He worked for Carrier Corporation in Syracuse for 23 years, retiring in 1980. He also owned and operated Ed's Bait Shop on Lewis Point Road for 25 years. Ed was a Veteran of the Korean War, serving overseas with the U. S. Navy from 1948 to 1954. He was a member of the former Loyal Order of Moose in Oneida, and in Florida. Ed loved fishing in Oneida Lake, in local streams, and deep-sea fishing, as well as traveling and camping. He married Donna L. Thorp on June 15, 1974, in Wampsville. Donna passed away on March 17, 2013. Surviving are: three sons and daughters-in-law, Edwin, Jr., and Kathleen Burlarley of Snora, CA; Wayne and Kelly Burlarley of Canastota, and Michael and Carmella Burlarley of Accord, NY; three daughters and two sons-in-law, Sandra and Kenneth Creeger of Zephyrhills, FL, Elizabeth Burlarley of Canastota, and Sandra and Steven Raushi of Canastota; a step-daughter and her husband, Wendy and Todd Miller of Mexico; one brother, Ralph Burlarley; one sister-in-law, Sonya Burlarley; eleven grandchildren; ten great grandchildren; as well as several nieces, nephews, and cousins. Ed was predeceased by a brother, Dayton Burlarley; and two sisters, Dorothy Mastro, and Dora Walters. Funeral services will be held at 11 a.m. on Friday, December 13, 2019, at the J. Homer Ball Funeral Home, Inc., 201 James Street, Canastota. The Rev. William M. Wilcox, Pastor of the Fyler Community Church, will officiate. Burial with Military Honors will be in Mt. Pleasant Cemetery, Canastota. Calling hours will be held on Thursday from 5 to 7 p.m. at the funeral home. In his memory, contributions may be made to the Oneida Lake Association, PO Box 3536, Syracuse, NY 13220-3536, with envelopes available at the funeral home.