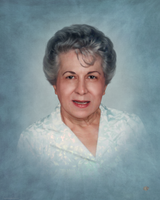 CANASTOTA . . . Jeanette T. "Gina" Farnach, 89, of Canastota, entered Eternal Life on Monday, December 16, 2019, at the Oneida Healthcare Extended Care Facility, after a brave battle with progressive Alzheimer's disease. The last five years of her life was spent at Crouse Community Center in Morrisville, where her disease disrupted her senses of time and place, but could not diminish her enjoyment of interactions with her caregivers and the family members who visited her regularly. Jeanette was born on October 10, 1930, in Rome, to the late Philip and Caroline (Cecchetti) Caponera. She spent her early years in Rome, graduating from Rome Free Academy in 1947. She lived in Canastota most of her life. Jeanette was employed by the Canastota Central School District until her retirement. She was devoted to her family and was a longtime communicant of St. Agatha's Church. Jeanette volunteered for the church Bereavement Program for many years. Jeanette was a member of the Ladies Auxiliary of the American Legion Charles Miller Post #140 in Canastota. She lived for her family and Sunday dinners. Jeanette will be missed by all. Jeanette married Anthony J. "Tony" Farnach on June 6, 1953, in Rome. Anthony passed away on April 25, 1999. Surviving are: two daughters and sons-in-law, Mary Anne and Thomas Grago of Wynantskill, NY, and Judith and Lawrence Morehouse of Oneida; one sister and brother-in-law, Patricia and Joseph Froio of Rome; five grandchildren, Jessica and Kyle Ratigan, Christina and Eric Bonesteel, Melody and Jack Gibbins, Anthony and Jennifer Morehouse, and Christopher Morehouse; seven great grandchildren, Logan, Charlie, Shawn, Nicholas, Lilly, Emmalyn, and MacKenzie; as well as several nieces, nephews, and cousins. Jeanette was predeceased by her beloved husband, Anthony; son, Daniel A. Farnach; brother, Angelo Caponera; and two sisters, Theresa Farino, and Delcie Castro. Jeanette's family wants to thank to the staff of Crouse Community Center for taking such good care of Jeanette, and special thanks to the Oneida Healthcare Extended Care. Funeral services will be held at 10 a.m. on Saturday, December 28, 2019, at St. Agatha's Church, 329 N. Peterboro Street, Canastota, where a funeral mass will be held. Burial will be in St. Agatha's Cemetery, Canastota. Calling hours will be held on Friday from 4 to 7 p.m. at the J. Homer Ball Funeral Home, Inc., 201 James Street, Canastota. In her memory, contributions may be made to Hospice & Palliative Care, Inc., 4277 Middle Settlement Road, New Hartford, NY 13413, with envelopes available at the funeral home.