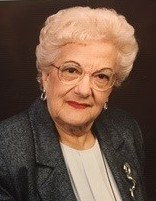 Please share a memory of Jessica to include in a keepsake book for family and friends.
View Tribute Book
CANASTOTA . . . Jessica Louise Moore (Becker) Collins, 95, of Canastota, passed away on Monday, June 21, 2021, at the Eastern Star Home in Oriskany, following a lengthy illness. She was born on November 21, 1925, in Canastota, the daughter of the late Fred and Jessie (Whitmeyer) Moore. Jessica lived in Canastota most of her life, and was a 1944 graduate of Canastota High School. For the last 4 ½ years she resided at Pounder Hall and at the Eastern Star Home in Oriskany. She worked for Henney Motors in Canastota, Diemolding Corporation in Canastota, Vernon Downs in Vernon, H & R Block in Oneida, and Turning Stone Casino in Verona, retiring in 2015. Jessica was a very cheerful and active lady in her church, the United Church of Canastota. Jessica served in many capacities including chair of the Administrative Council. She was a member of the choir and graced the congregation with beautiful soprano solos. She was a valued representative to the Canastota Area Association of Churches and served as president for several terms. In the 1980s, Jessica saw a need in the community to help those less fortunate. She founded Loaves & Fishes Hospitality Center which continues to serve any who are hungry a hot lunch and bag supper the last full week of each month at 144 Center Street. For over 35 years, she was the chief cook/director, providing thousands of meals to those in need. She had an extensive Eastern Star career. Jessica was initiated into Oneida City Chapter #21, now Silver Star #21, in 1981. She served that Chapter many times as Worthy Matron. Jessica joined Vesta Vienna Chapter 115, as a second chapter, and served there as Worthy Matron three years. She served the Order on the State Level, as Grand Chaplin in 2000, and as District Deputy Grand Matron in 2007. Jessica enjoyed sewing and volunteering in her community. She married A. Richard Becker on May 9, 1952, in Canastota. Richard died on December 13, 1996. Jessica later married Clarence W. Collins on August 17, 2001 in Whitelaw. Clarence died on April 11, 2017. Jessica was predeceased by her mom and dad, Fred and Jessie; six siblings, Mrs. Nellie Chambers, Mrs. Pearl Weide, Mrs. Ruth Wynn, Mrs. Fredericka Nodecker, Mrs. Florence Perretta, and Mr. Fred Moore, Jr. She is survived by and will be greatly missed by several nieces and nephews, including her niece, Marilee Ruth Hore of Ontario, Canada; and Clarence's children. Due to the COVID-19 Pandemic a Memorial Service will be held at a later date and time to be announced. Arrangements are under the supervision of the J. Homer Ball Funeral Home, Inc., 201 James Street, Canastota. Burial was in Mt. Pleasant Cemetery, Canastota. In her memory, contributions may be made to the United Church of Canastota, 144 Center Street, Canastota, NY 13032, or the Eastern Star Home, 8290 State Route 69, Oriskany, NY 13424.
To plant a beautiful memorial tree in memory of Jessica Moore-Collins, please visit our Tree Store
Tuesday
20
September

Share Your Memory of
Jessica
Upload Your Memory View All Memories
Be the first to upload a memory!
Share A Memory
Plant a Tree