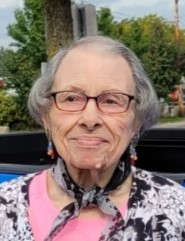 Obituary of Shirley A. Kitts

Please share a memory of Shirley to include in a keepsake book for family and friends.
View Tribute Book
ONEIDA . . . Shirley A. Kitts, 94, formerly of 226 Farrier Avenue, Oneida, passed away on Wednesday, September 21, 2022, at The Grand in Utica, following a brief illness. She was born on October 15, 1927, in Oneida, the daughter of the late Albert and Gladys (White) Menzer. Shirley lived in Oneida all her life, graduating from Oneida High School in 1945. Later she attended Morrisville College and the Maryland College for Women. She worked in food service at Oneida High School for over 21 years, retiring in 1987. Shirley was a member of the First United Methodist Church of Oneida, a member of the Church Administrative Board, the Women's Bible Study group, and other women's organizations at the church; the AARP (American Association of Retired Persons); a former member of Oneida Chapter #21 OES (Order of the Eastern Star); and had been a Girl Scout leader in Oneida for 9 years, and had been the Church Coordinator for the Oneida Karing Kitchen. She married Miles B. Kitts, II, on September 6, 1947, in Oneida. Miles passed away on June 10, 1977. Surviving are: one daughter, Martha Skovenski of Oneida and Chandler, AZ; one grandson, Michael A. Skovenski of Snowflake, AZ; as well as several cousins. Shirley was predeceased by a son, Peter F. Kitts, who passed away in 1994; and her beloved son-in-law, Michael W. Skovenski, who passed away on December 13, 2012. Graveside services will be held at 11 a.m. on Saturday, October 1, 2022, at Glenwood Cemetery, Oneida. Trish Johnson will officiate, with Nancy Zlomek to speak and James Tuggey to sing at the service. At Shirley's request, there will be no calling hours or funeral service. In her memory, contributions may be made to the First United Methodist Church, 116 W. Grove Street, Oneida, NY 13421.
To plant a beautiful memorial tree in memory of Shirley Kitts, please visit our Tree Store
Saturday
1
October

Share Your Memory of
Shirley
Upload Your Memory View All Memories
Be the first to upload a memory!
Share A Memory
Plant a Tree