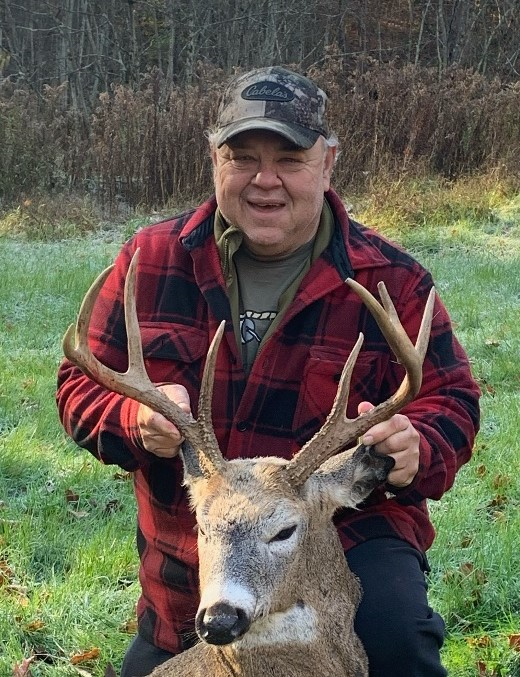 Please share a memory of Ricky to include in a keepsake book for family and friends.
View Tribute Book
LAKEPORT . . . Ricky Paone, 60, of 105 Willow Road, Chittenango (Lakeport), passed away unexpectedly on Tuesday, November 1, 2022, following an apparent heart attack. He was born on April 27, 1962, in Canastota, the son of the late Salvatore "Sam" and Frances "Fran" (Conte) Paone. Ricky lived in Canastota most of his life, graduating from Canastota High School in 1980, and later attended SUNY Morrisville. He has lived in Lakeport for the last twenty-five years. He was a heavy equipment operator, retiring from OCWA after working there for many years, and had previously worked for the Village of Canastota Highway Department. Ricky's passion was wetland conservation, and he enjoyed hunting, fishing, training hunting dogs, dancing, cooking, gardening, his many dogs over the years, and spending time with his family. He was fun loving and was always the life of the party. He was a member of the Wildlife Federation, Ducks Unlimited, Pheasants Unlimited, the NRA, and other conservation organizations. Surviving besides his loving companion of 19 years, Donna (King) Woodard are: one stepdaughter and her husband, Autumn and Nicholas Wehrlin of Chittenango; one stepson and his wife, Joshua and Chrystal Woodard of Land O Lakes, FL; one sister, Jeanette Paone of Aurora, CO; six grandchildren, Madison Wehrlin, Kyle Wehrlin, Isabella Woodard, Allison Mueller, Matthew Mueller, and Holly Mueller; his Goddaughter, Samantha (Rossi) Rhoads; as well as many cousins. A funeral mass will be held at 2 p.m. on Tuesday, November 8, 2022, at St. Agatha's Church, 329 N. Peterboro Street, Canastota. The Rev. Nathan Brooks will officiate. At Ricky's request, there will be no calling hours, but the family will greet people at the church after the mass. Everyone is invited to a gathering at the Three Pines Restaurant in Canastota following the mass. Arrangements are under the supervision of the J. Homer Ball Funeral Home, Inc., 201 James Street, Canastota. In his memory, contributions may be made to the Ruffed Grouse Society, 100 Hightower Blvd., Suite 101, Pittsburgh, PA 15205, or to the Oneida Lake Association, PO Box 3536, Syracuse, NY 13220, with envelopes available at the church.
To plant a beautiful memorial tree in memory of Ricky Paone, please visit our Tree Store
Tuesday
8
November

At Ricky's request, there will be no calling hours, but the family will greet people at the church after the mass.

Everyone is invited to a gathering at the Three Pines Restaurant in Canastota following the mass.
Online Memory & Photo Sharing Event
Online Event
About this Event

Share Your Memory of
Ricky
Upload Your Memory View All Memories
Be the first to upload a memory!
Share A Memory
Plant a Tree